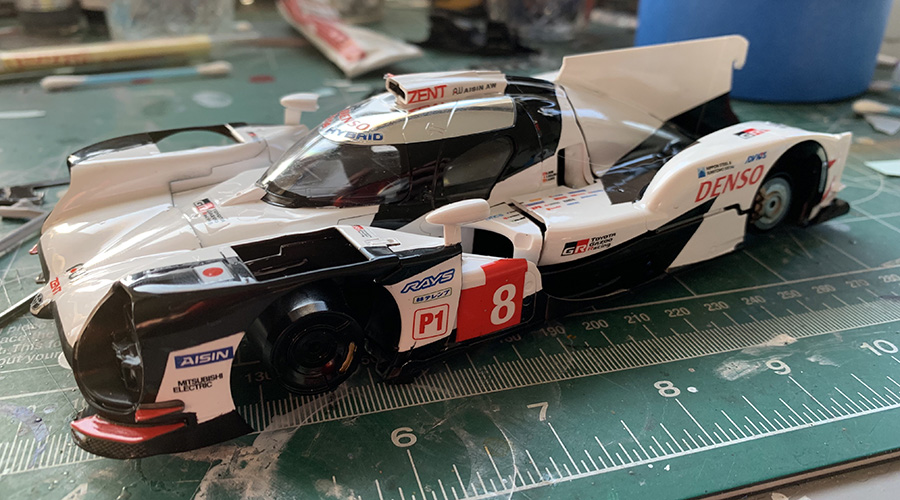 Front and rear end as well as the airbox are simply put in place, but the engine cover is fitting a lot better now. I've also placed the mirrors on the car, which are a bit of a mess because of the fragility of the mirror mounts (the one on the right side is just plastic sprue) and how they dried in place. I also had to reglue on the left side number plate as that decided to become dislodged whilst putting the mirror on too.

The decal on the chrome piece actually came out pretty well despite there being a ton of film on the decal too, as its just one decal. Placing the engine fin was pretty easy, although you can see the one area I messed up a bit and need to touch up on the black 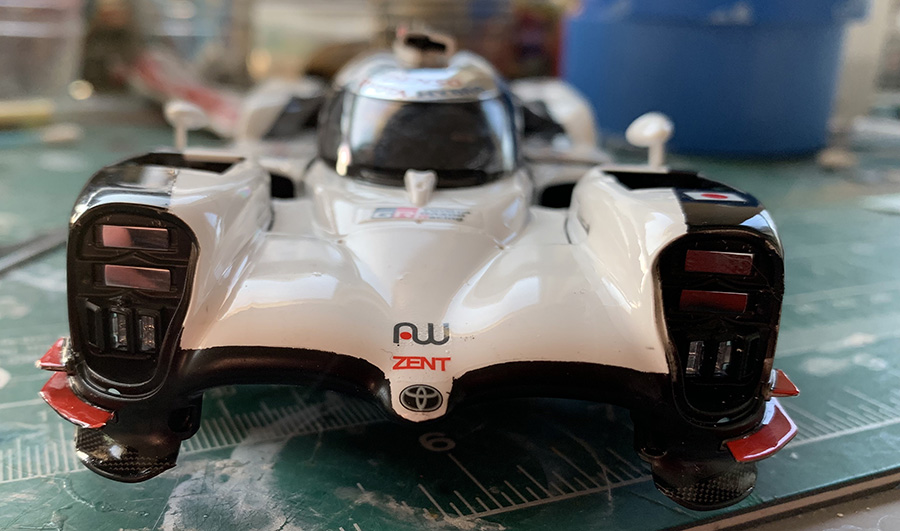 This was where I spent most of the night, with getting the lights all fixed up, the decals on the front end and the flip ups. The flip ups are way too thick and the decals don't look great on them, so next time it will definitely be thinned and painted after being on the body. I'll be making sure to polish up the transfers before putting the headlights on later this week.

Next step will be finishing up the front lights, getting the light cover on and filling in the plastic around the front end with the gaps.
Top

Wow, that looks like a challenging kit. It's looking great, can't wait to see the finished product.
Top 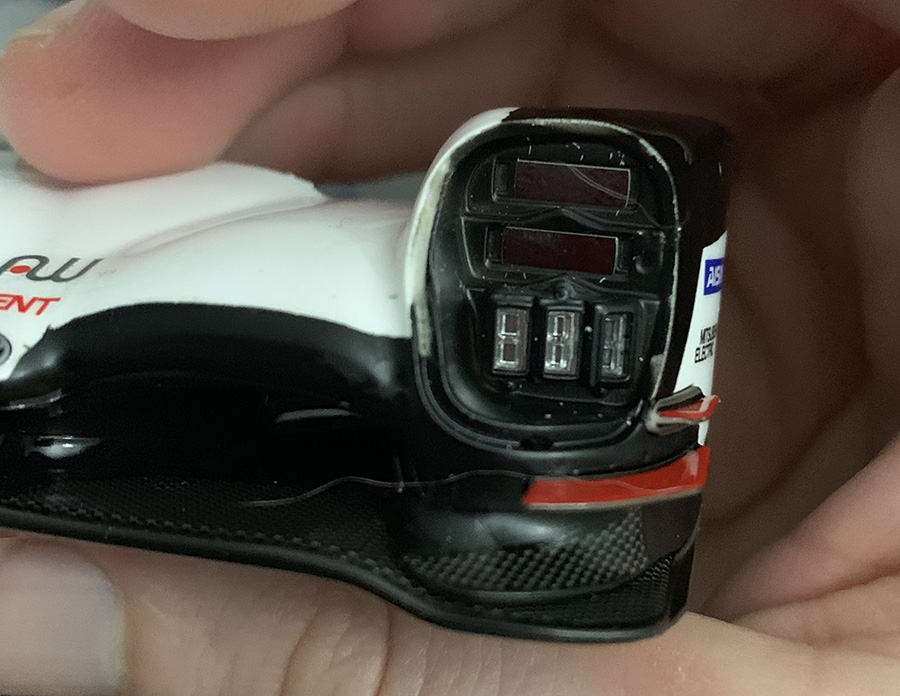 Ignore the dog hair in this pic or the next one. The front headlights are pretty complicated obviously, and this shows it with the metal transfers in place. 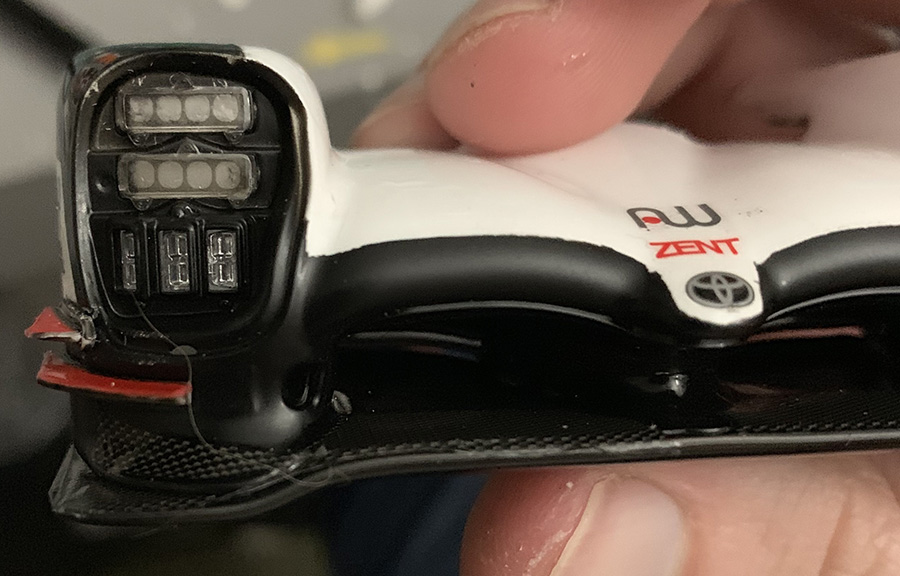 The kit is pretty complicated and this was part of a screw up I made early on. The kit asks you to paint the outside of the headlight part in semigloss black and leave the center clear. What I didn't realize with everything else was that the metal transfer was supposed to be seen through the headlight. I tried to polish out the paint but never got it 100% clear again. I'm sure it will look better if you follow the actual directions. 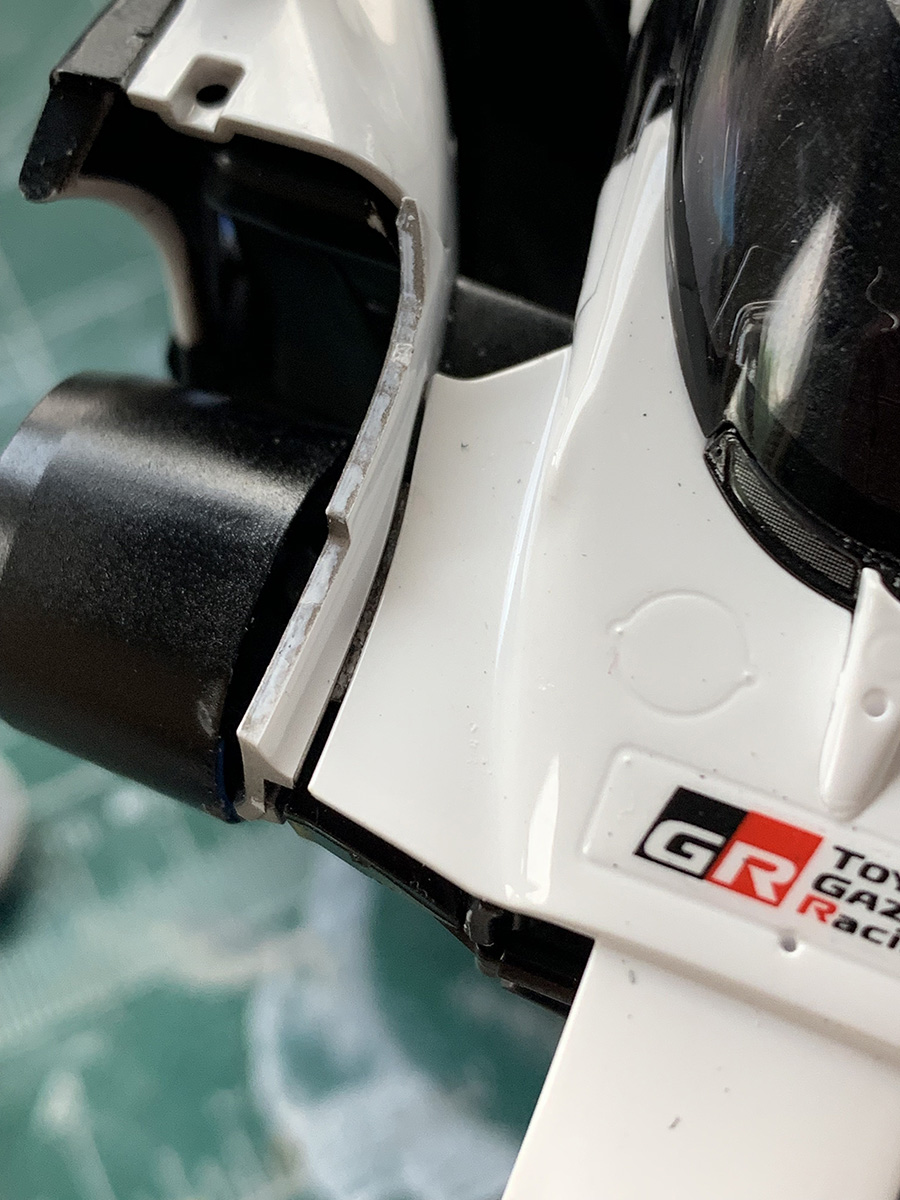 I had this problem with the car and was trying to think of a way to fix it. The fix was pretty obvious. 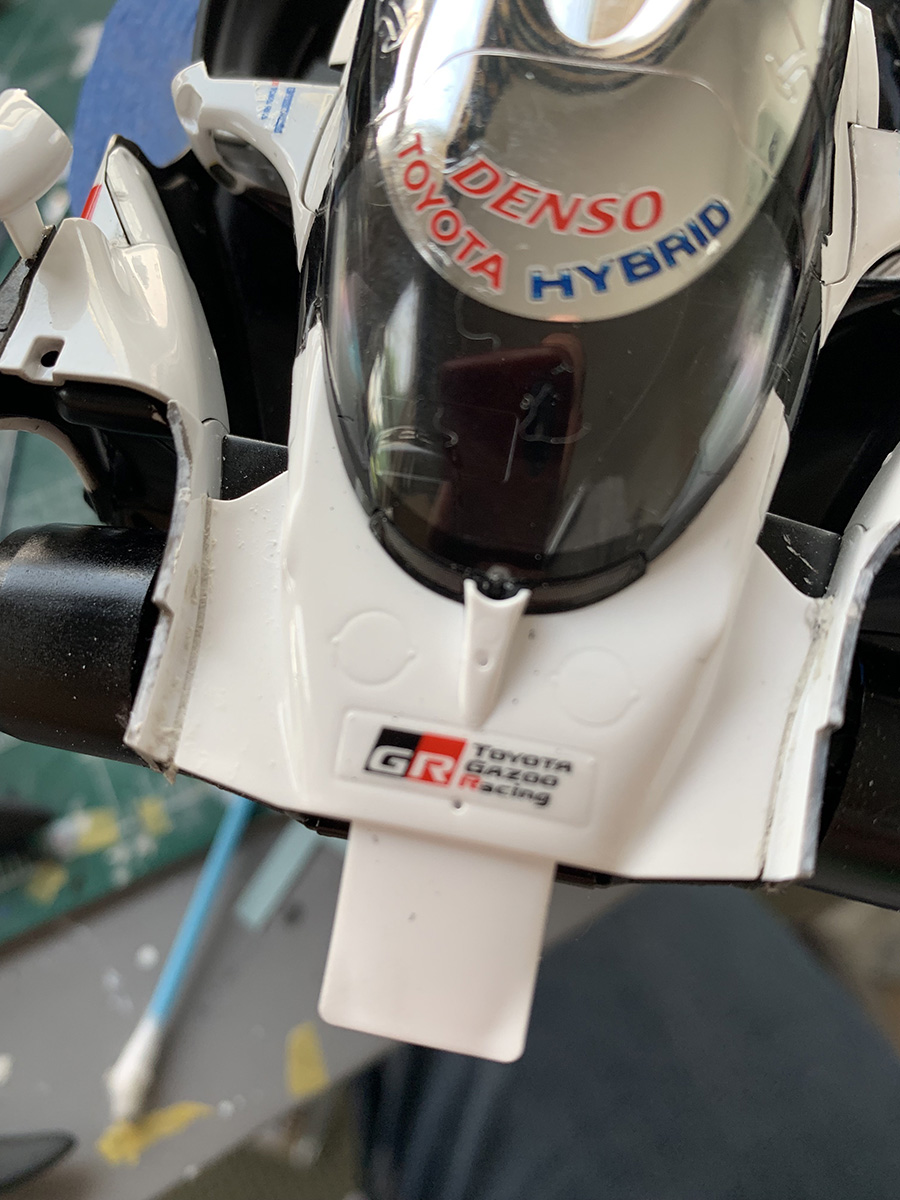 Use putty! Yes, it doesn't look great here (this is before I cleaned it up a bit) but it will be covered by a red decal shortly. 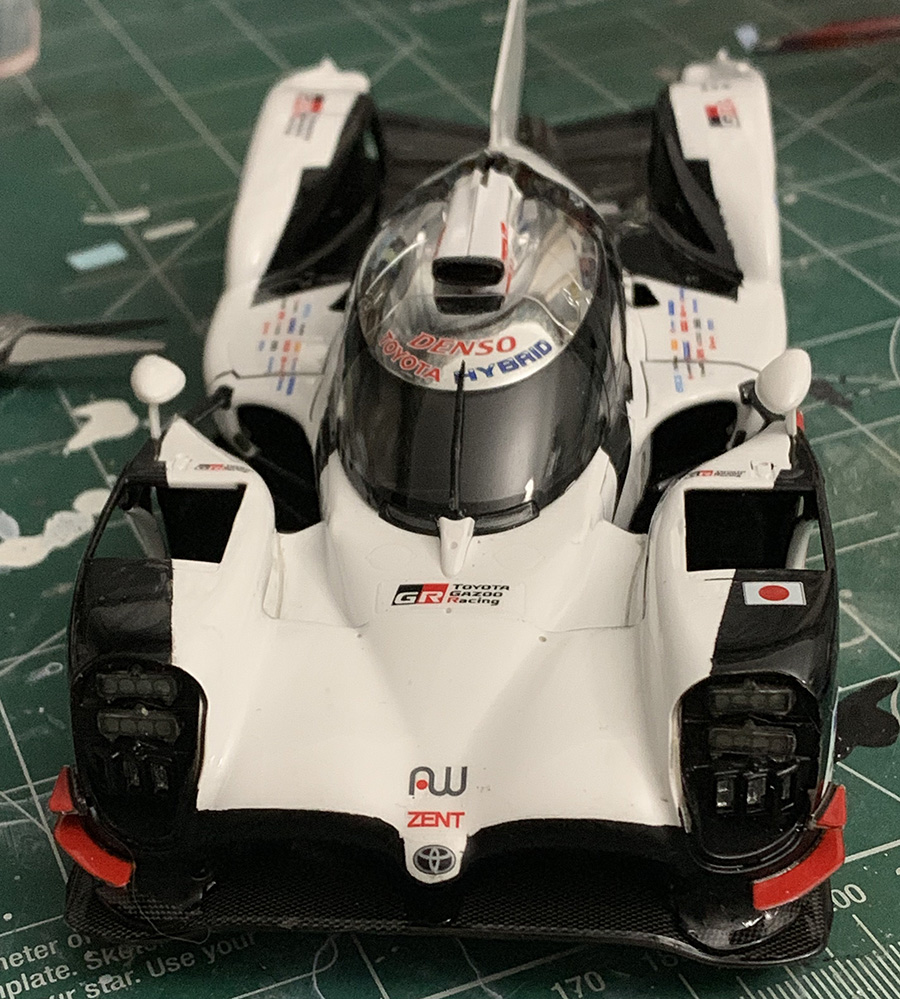 Another test fit of the front end. I put the headlights on with simple clear paint so am giving it a ton of time to fully dry. As can be seen I still have a bit to fix with the left side headlight. The front nose is all together though which looks pretty nice. It was my first time getting CF decals to lay down perfectly. 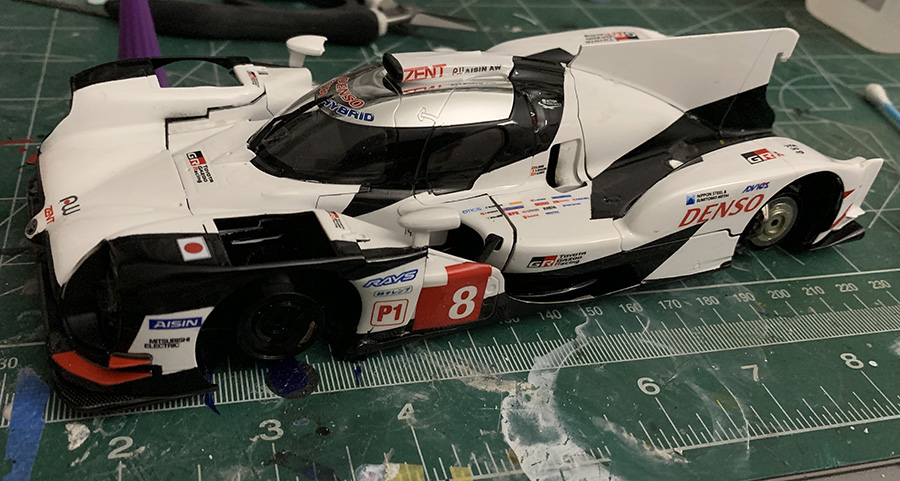 And a much better view of the rest of the car. I fixed the rear engine cover by removing some extra plastic on the chassis. The airbox is on now as well as the exhaust and body reinforcements near the number board. Super annoyingly, I had to do some touchup painting with semigloss black on the interior of the engine cover where I didn't cover very well...right where the decals got stuck to the tape. So that was just some salt in that wound.

I'll be wrapping up the wheels next and mounting them to the car before gluing the front and rear end on the car as well as the rear wing. Then its the final step of decals and I'll be done. This will likely be the last update as my micro steps don't seem to be too interesting to most.
Top

It's coming together nicely! I think this will look great after the red decals have been applied.
Top

Your patience and explanation of each issue you encountered has me inching toward ordering one of these. Thanks for your effort.

Thanks for the comments, I think people sometimes forget how much effort is required for these threads, so it can be a bit discouraging when I make multiple posts in a row and don't get any feedback. Good to know it is appreciated 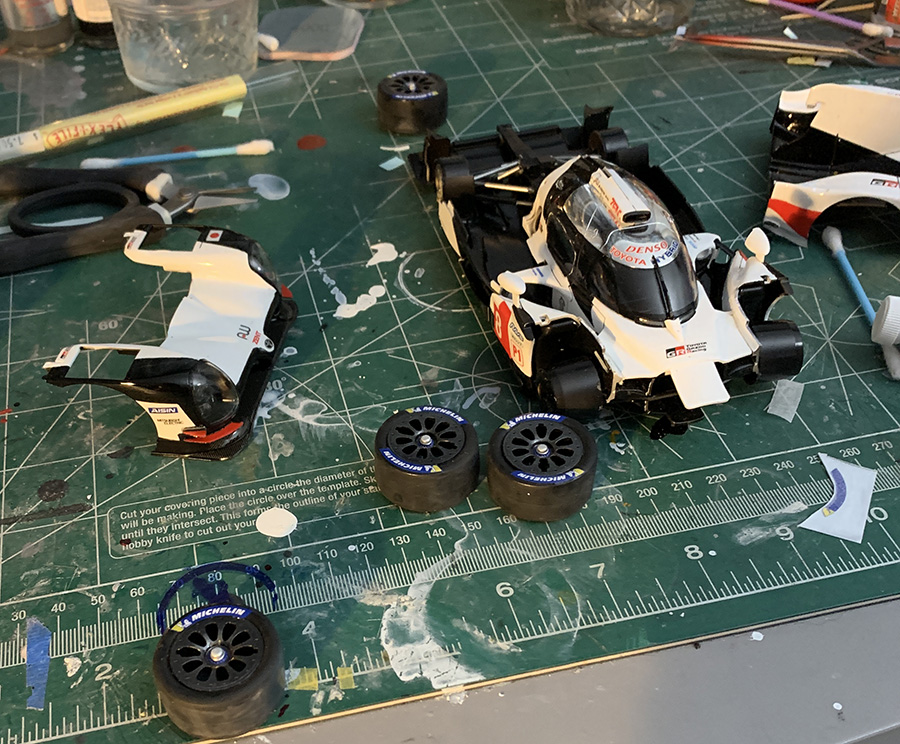 I'll start with a pic of the workbench while putting the tire decals on. Once I finish this kit I'll be going on vacation shortly so plan to concentrate on working on my bench to clean it up and make it more useful.

The wheels are two parts and goes together easily. The mold line on the tires is extremely faint, but just like the Williams kit I made a mess of sanding the tires down. I need to figure out a new process for this. The wheels originally were Alcad Gunmetal but this proved too dark so I used steel which came out a lot better color. Next time I'll get a better gloss coat on the wheel nuts to get a better chrome coat on. The tire decals went on pretty well but I still rush them so they're not as perfect as I'd prefer. After letting them dry for a day I use elmers glue as a matte clear coat. 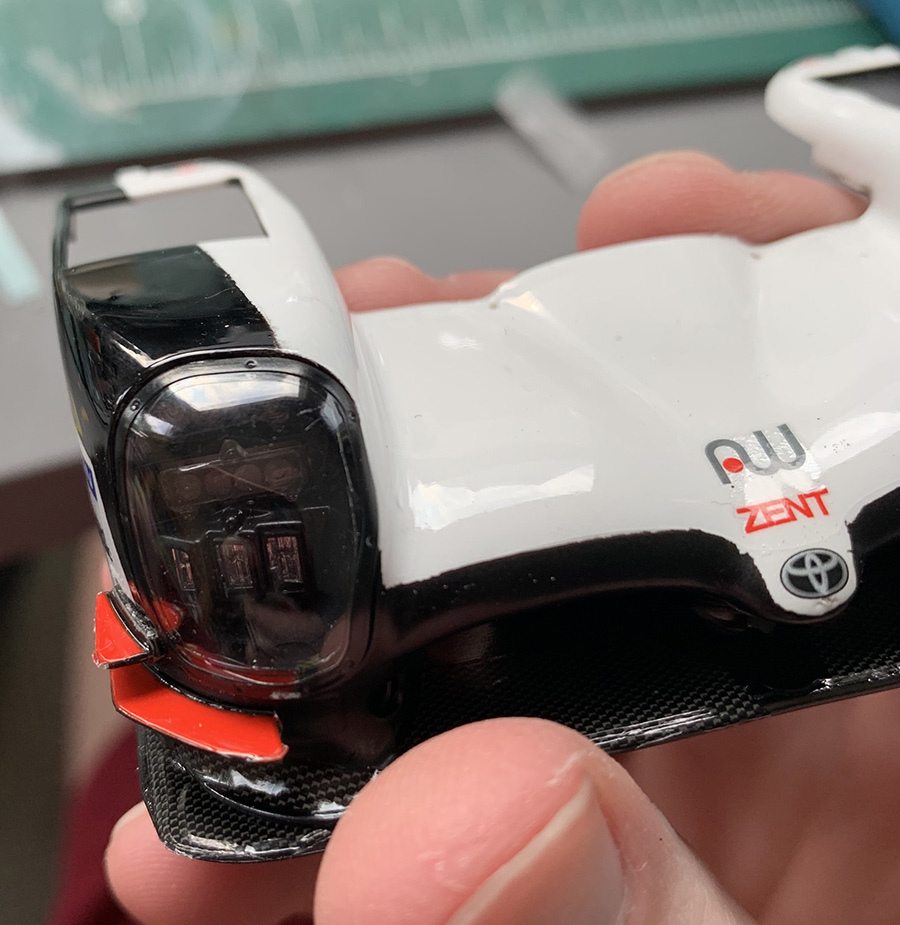 Going back a few weeks for the headlights I used my own masking so its not 100% perfect, but it would have been so much worse with the kit included mask which was 3 parts! Two masks are for the sides and one for the center. Its hard to see through pictures but they're incredibly complex designs so its not as simple as just getting a piece of blue tape and laying it down. I'll hopefully learn and do a better job next time. I used clear paint to secure the headlights. 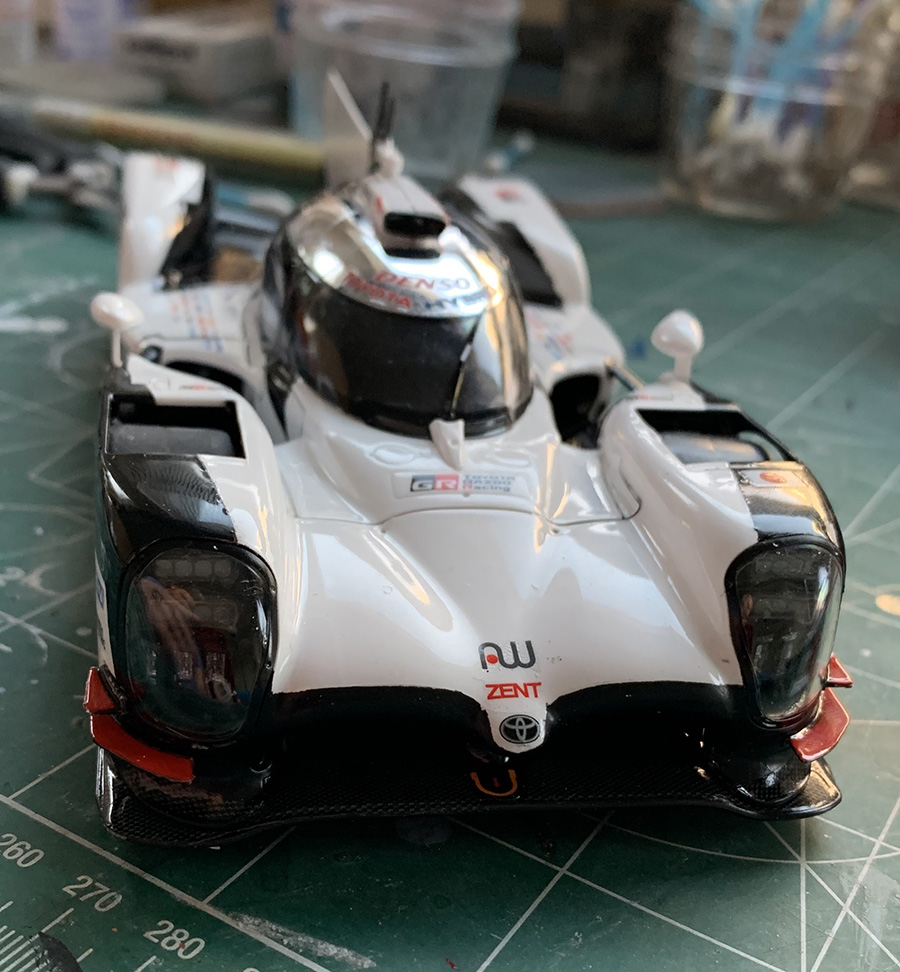 And now its together! While tinkering with the body I realized that the right side number plate part is too far forward. Unfortunately its too secured to move it. I made sure to place this wheel first, and it touches the tire but is otherwise OK.

The top body work clips into holes in the number placards which I thinned slightly. I initially had issues with the two notches from the chassis which go into the nose bodywork keeping the nose from securing properly, so I separated it out, thinned out where the connection is made and got the bodywork down as well as it would go (there is a big gas that is my own fault. After I felt confident the nose parts were secure I placed the splitter on. This went together a lot better than I was expecting. There was a bit I needed to touch up on the side of the nose.

I also got the fuel filler, engine cover and antenna on. You can see where the mirror mount part isn't mounted properly on the right side. The engine cover came together really well though. There is a bit that isn't perfectly painted but with all of these body parts that was never going to happen.

When I build the kit again I'm considering putting almost all the bodywork together prior to painting. There are some pieces that would need to be kept separate but overall more can be put together than the instructions call for. A lot of those which are kept apart to paint the interior pits are impossible to see for example, such as the number placard interior or even 90% of the nose/engine pay.

Next steps are to put the red decals on, as well as the Indycals WEC and Le Mans decals, the rear wing and then a few antenna parts.
Top

Question about the elmer's glue...you just spread a thin layer of it over the tire decal to make the decal less shinny? I have some tire decals I'd like to tone down. Thanks.
Top

Question about the elmer's glue...you just spread a thin layer of it over the tire decal to make the decal less shinny? I have some tire decals I'd like to tone down. Thanks.

Yep! I typically layer it on in a few coats to make sure it dries well, but its super easy to do. If you'd find it useful, I could make a separate thread with how to do it.
Top
Post Reply
61 posts