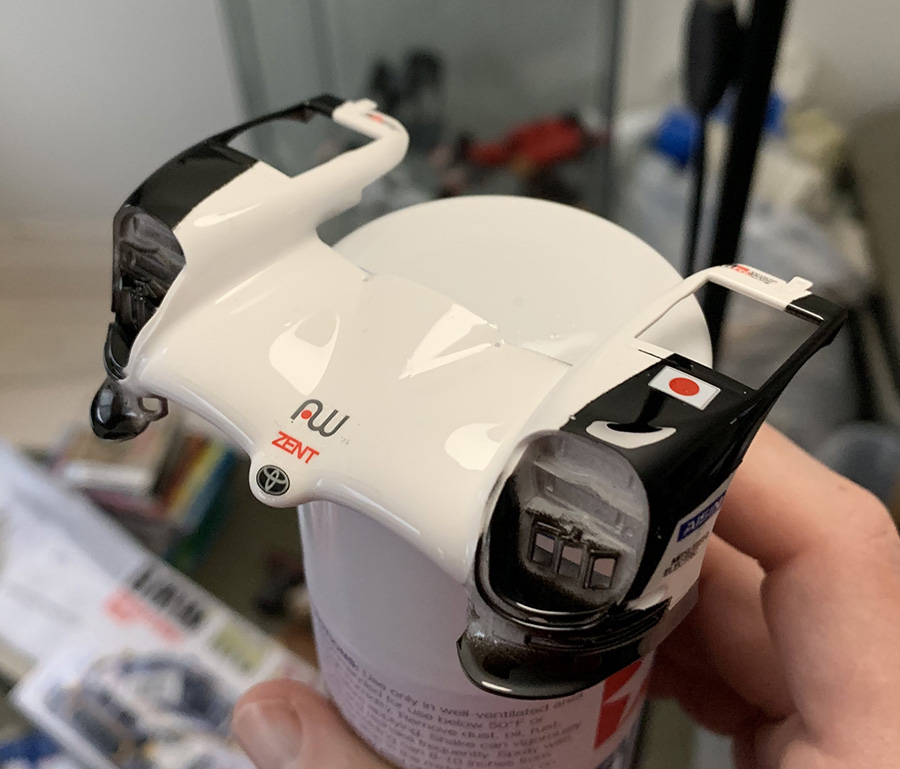 I'm using Splash 2k Clear's old formula for the clear coat. This time I did put 1 part Mr Color Leveling Thinner to 4 parts hardner to make it level out a bit more. 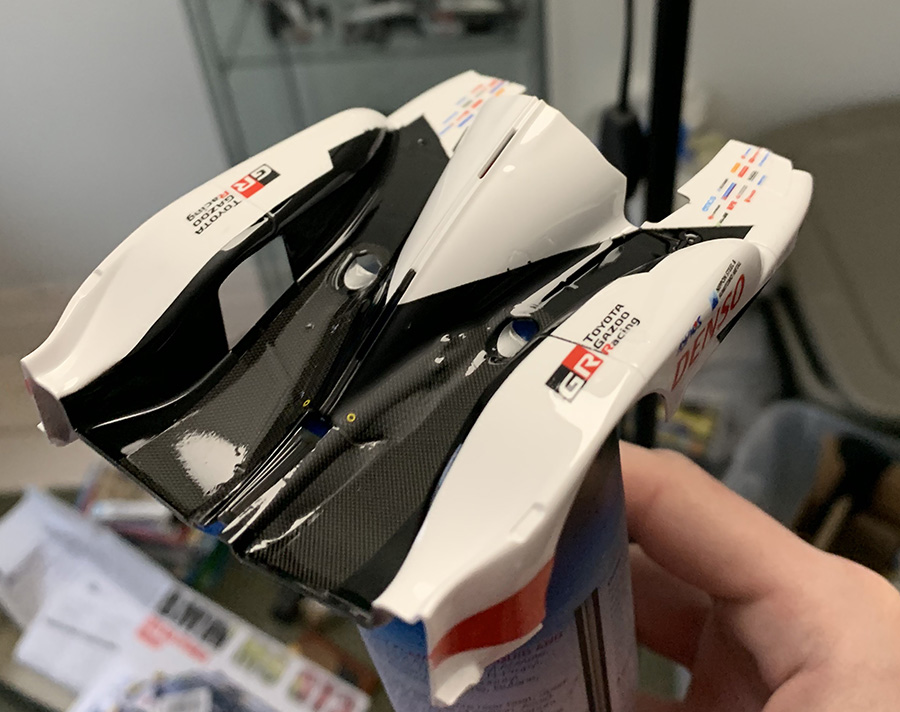 Really happy with the results of the clear, even though its completely inaccurate for the real car! 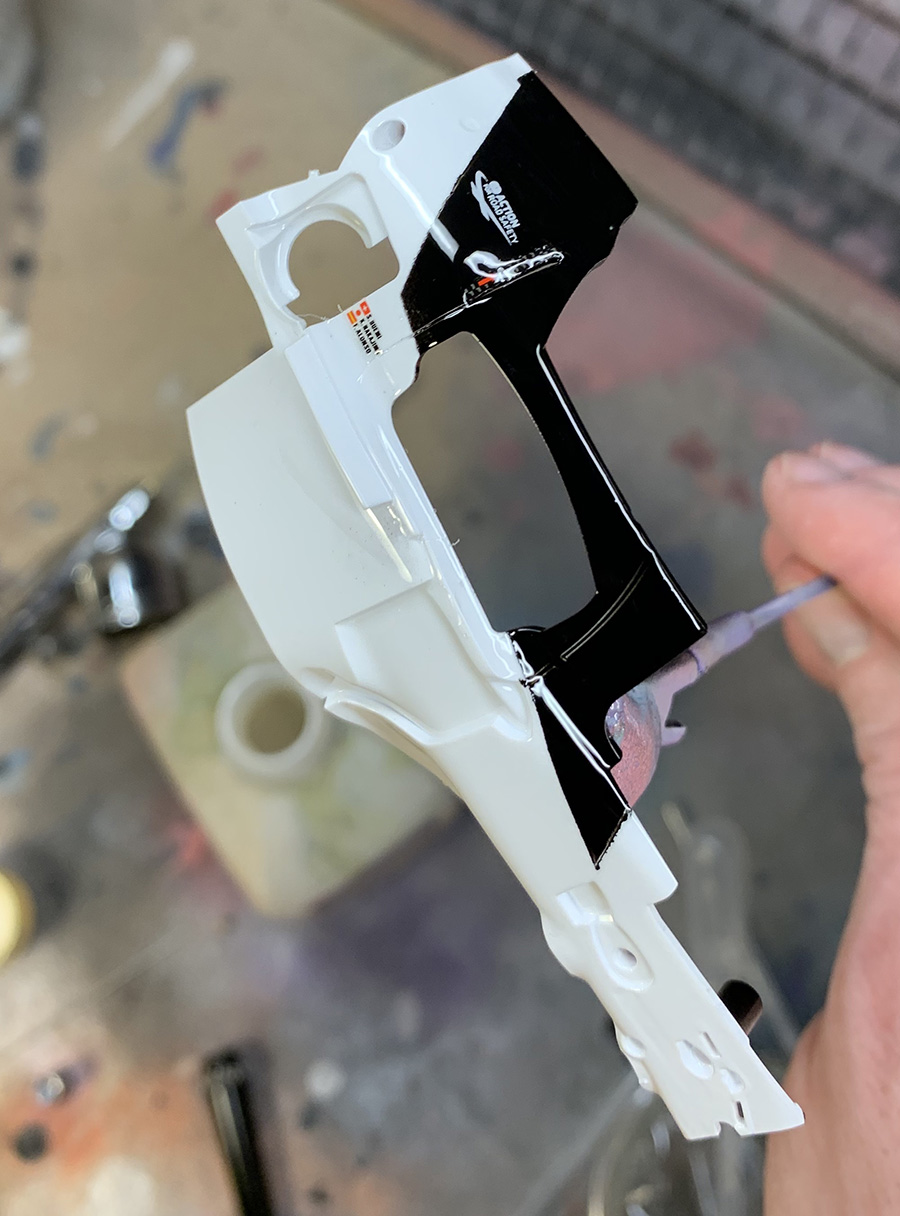 Still have to get better at masking as can be seen here, but overall its good enough for me. 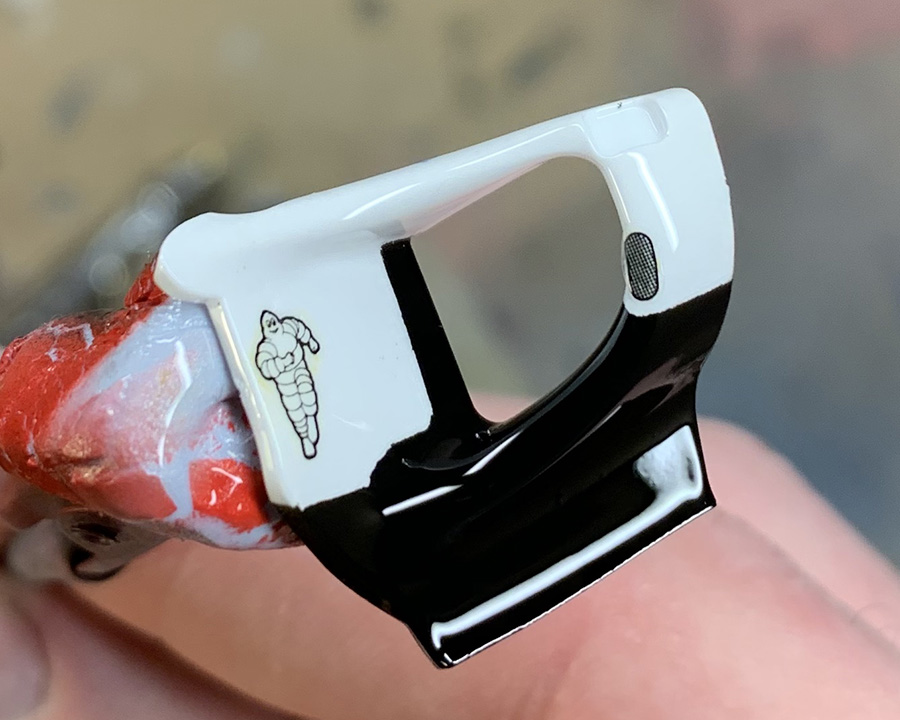 Final picture for now showing my favorite part of the car.

Plan is to paint the semi-gloss black either tonight or tomorrow morning and start building it Sunday afternoon.
Top

daveyman wrote:The other thing about painting parts on the sprue is that you can't dry fit. Even on a Tamiya kit you should always dry fit, especially on bodywork where its very difficult to solve any fit issues with paint on.

I also am curious about how much consideration needs to be given to paint thickness when it comes to assembly fitment? Newer CAD designed models seem to have limited to no consideration for this issue. Good job so far, looking forward to next steps.

Looks great so far! Looking forward to seeing this to completion. Mine is in the mail and should get here Monday. I also ordered the Revell Ford GT to continue the Le Mans theme.
Top 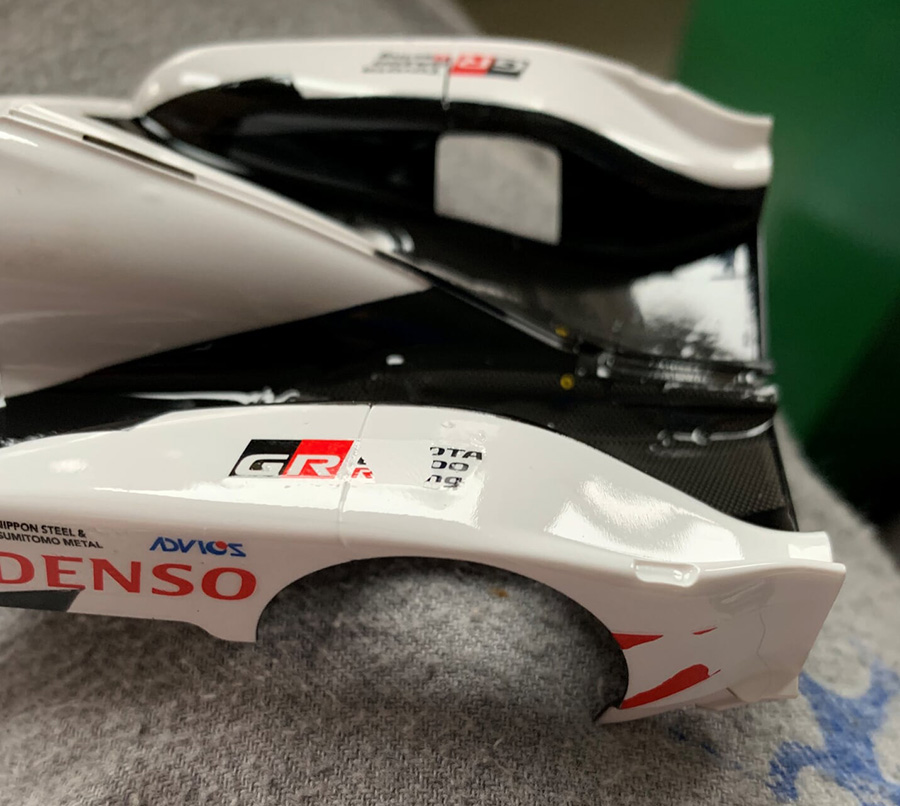 Welp, a minor whoopsie was bound to happen at some point. I used 3M blue tape on the body to try to prevent any overspray and it took a few decals out with it. Luckily, this is all a removable part of the body, so I'm going to try to get some replacement decals on order today. Worst case I'll just buy another model and steal those decals since I know there is an aftermarket sheet coming out in about a month. The rest of the parts have the interior painted almost entirely, although a few spots will need an additional coat tonight to cover where I used the putty to hold onto the part.
Top

cooperclimax1 wrote:To Dancraft: haven't seen the LP paints here in the US yet. Has anyone else?

I talked to Chris at Up Scale Hobbies and he's waiting for Tamiya to make their labels USA-compliant. Then he'll stock them.

In the meantime, I've built-up collection of colors, including all of the LP colors called out on the TS050 instructions from seller "animetropolis" on EBay. About $3.49/bottle. The seller is in Hong Kong I think.

Cheers,
Greg
"Everyone dreams of driving a Ferrari, it was my intent from the start." Enzo Ferrari
Top

Thanks for the info Greg. 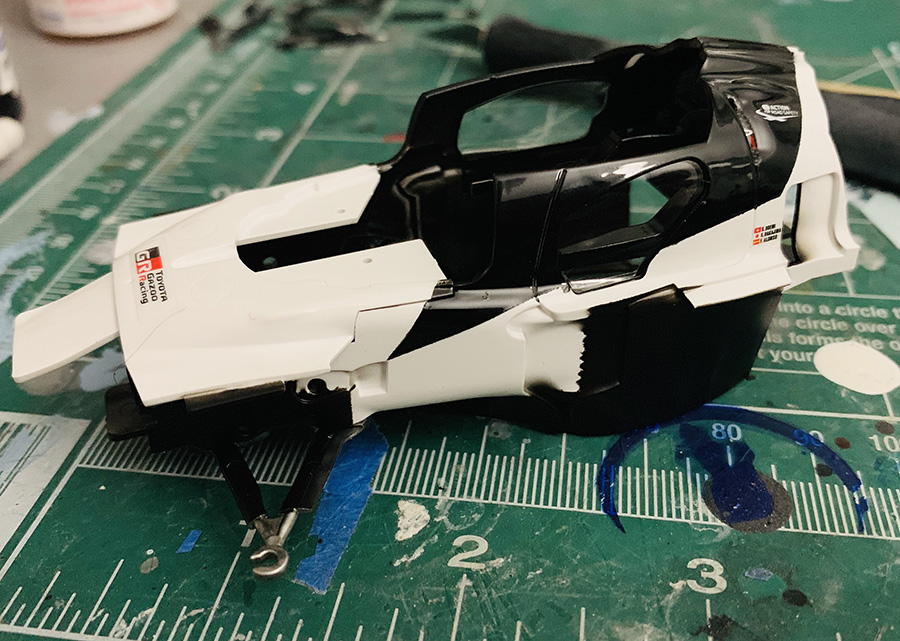 Not a great image but I'm slowly making progress! The next time should have a lot more parts on. Yesterday was dominated by trying to fix my refrigerator all of the night so I didn't get very far with the car. I did use some of the masks for the glass on this part, but frankly the outline is so tiny that it almost seems like a waste of time for much of it. For those wondering, you can connect the left and right side of the cars prior to painting if you want and still get access to everything you need later on in the build process, but it doesn't get you very far. The only real improvement would be in the black lines on the front suspension cover. The left side is good but the right side is a bit off. When I build my second one I'll figure out whether this is something I'm interested in doing or not.
Top 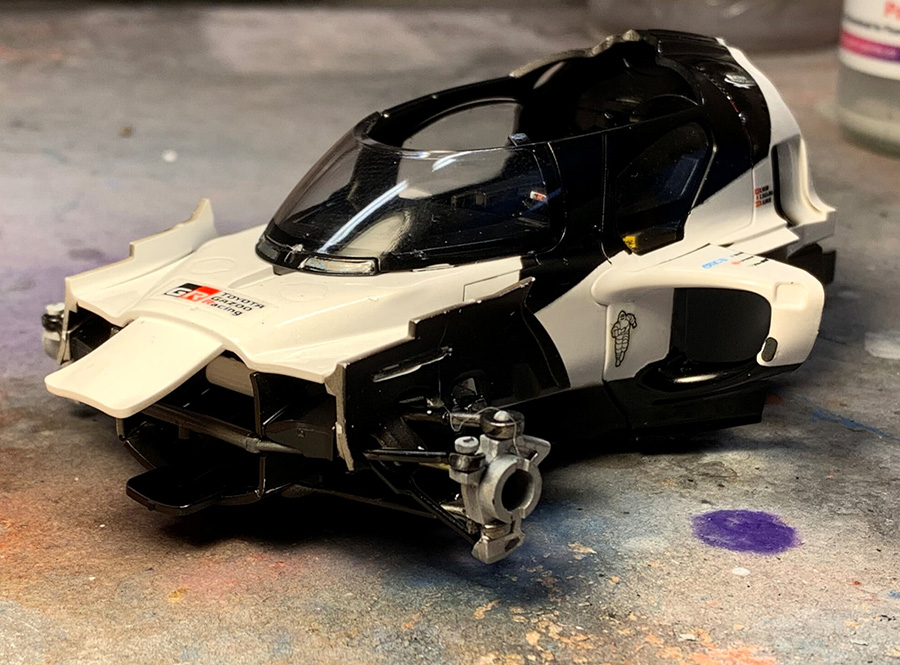 There were a lot of hours of work in between the last pic and this one. While I understand the reasoning for some of the ways the model was supposed to be put together, next time I'm definitely putting more of the car together before I start painting as it caused a lot of problems. In fact, while trying to get the top front suspension arms on the entire car exploded! Luckily all the parts broke on the correct seams so nothing bad happened. I obviously have a few seams to paint as well, but after 3 hours of building I needed to get to bed!

The front suspension is way more fidly than this picture shows, and unfortunately the top body work depends on this being exactly right to fit properly. I think what I will do next time is place the top suspension parts in before I paint, as well as place the side pod bodywork on the car as well. These up close pictures make it look way worse than it is, but its still not as flush as I would like. I'm now at the point where the gearbox can be mounted as well as placement of the roof.

I also got much of the extra bodywork on the floor put in as well. This weekend I'll make sure to outline exactly what parts I feel should be placed before painting to help others out!
Top

I'm still working out how best to do these WIP, if anyone has any requests or things they wished I covered let me know!

Have made a lot of progress in between as well as recovered from several self created disasters. The front and rear covers are simply placed on which is why they don't look great. I need to figure out the issues with the rear bodywork obviously!

I got bit by placing paint on bodywork where there wasn't a ton of tolerance for it, especially on the chassis. While the instructions tell you to place these parts after painting, I'm assuming they want you to install them first and then paint. When I do this car again with the 2019 scheme, I'll be placing a lot more parts on the chassis to avoid this issue.

I also ran into further issues with the right side window coming out. The biggest problem here is that after putting the chassis together its almost impossible to get to this, so if it fully fell out I'm kind of screwed. Luckily I was able to find a small slit to place a paint mixer in to secure it, and used what I thought was clear paint to secure the window. It was not. It was flat base...so I had to polish that out as best I could whilst not pressing anything too hard! It looks decent but will require some clean up. 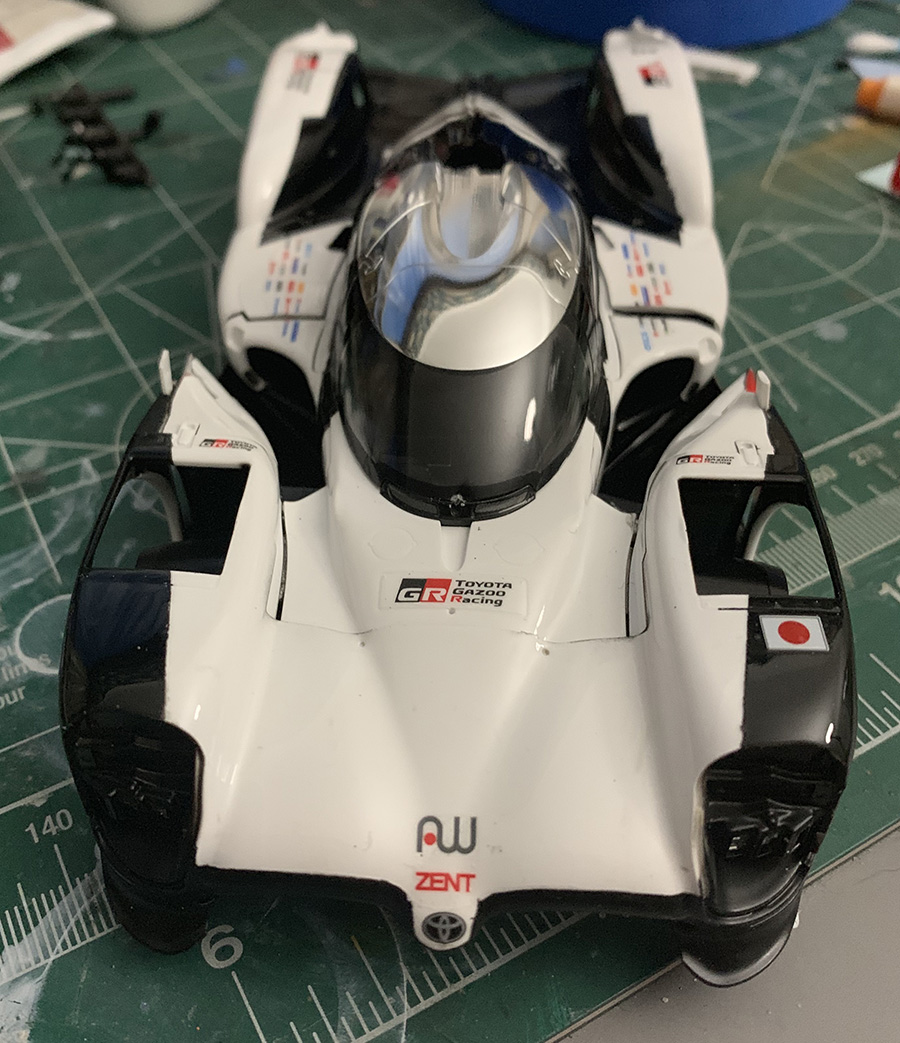 The big issue I ran into here was the flipups on the side not being flush which put the bodywork off. I eventually had to remove the flipups, make them flush then get them back in...so yes, this is actually after I improved it! The good news here is that the gap will be covered by decals, so I plan to fill it in with something and then put a decal over it all. Next time I'll simply put the bodywork on at the start, as the white/black dividing line can't be seen once you put it together.

You can see here the replacement mirror holder I created as well. It's not perfect but it will work for what I need it for. 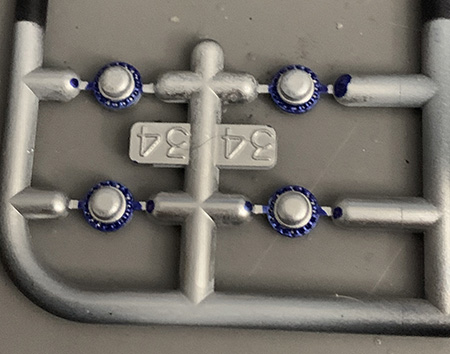 I started using some paint pens instead of actually painting and its working pretty well. I also painted the gold on the front wheel hubs this way. While it isn't perfect it does look pretty nice.
Top
Post Reply
61 posts