As usual, what version is MFH doing here, because after several searches on the net, cannot find a single car that matches what is provided in kit, mainly in engine area

I know I am late to the party again but here goes, while I have not seen the MFH Ferrari 512S 1/12th scale kit may I offer the following.

The 1/12 scale MFH kit is of the 1970 Ferrari 512S Coda Lunga or Long Tail 5 liter sports racing car, from what information I have the Coada Lunga body was only used at Le Mans. The Ferrari 512S also appeared as a private entry in some 1971 races most notably coming in second overall in the Daytona 24 Hrs. race in that years’ event. Several 512S’s were modified to 512M specification for 1971, these were all entered privately. 512’s were modified and entered in the CanAm and Interserie sports car championships. There was also a 512S that was modified in 1971 to resemble an M spec. car but built around a Porsche 917 windscreen making the cockpit narrower and thus the rear end more efficient.

The 512S’s appeared as either coupes or spyders (with and without a roof) with two distinct designs of the nose bodywork and four different rear body work designs plus variations made by individual teams following their own development work.

With regard to a difficulty in finding images of the 512S, the problem is that this number was used for three cars by Ferrari what you need to do is enter into your search engine:
“Ferrari 512S” 1970

When looking at images on the internet remember to determine whether the pictures were taken in period or are of restored cars that may have modifications for modern day racing.

From the MFH pictures that I have seen of their model I would agree that I have raised an eyebrow about the positioning of some parts of the rear chassis and the anchor points for the rear suspension trailing arms, but these may have been modified for the 1970 Le Mans race which the car is intended to represent. Alternatively the pictures that MFH have released may be of a prototype model and the observations that I have made above may have been corrected in the production kit.

Other sources of information on the internet may be found via the following links:
General information with drawings at the bottom of the page:
http://tech-racingcars.wikidot.com/ferrari-512-s

As an aside the Model Cars magazine archive of Prototype Parade drawings from November 1952 to December 1972 is available via the following link:
http://vsrnonline.com/Mags/MC/MC_Plans.htm

I am working on a 1/12th scale 512S model at the moment click on this link:
viewtopic.php?f=29&t=9530&hilit=Hacksaw&start=30
It is not the MFH kit rather a big resin brick which is keeping me “challenged”.

Thank you for the response

The only photo, I have ever seen which meets the engine of the MFH kit is this : 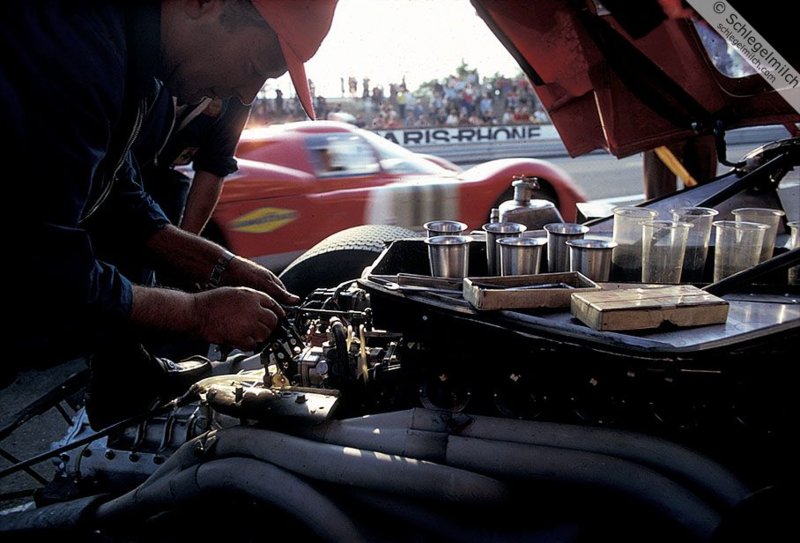 Photo copyrighted and posted for reference only.

Le Mans 1970 for the sure but unknown car. Also, I don't know if all the long tails meet the same specs (at least for the 6 aluminum + 6 clear air funnels) or it is a particular car.
https://gtziafmodelling.wixsite.com/gtziaf
Top

Video here with some engine bay shots of I believe the #8 at around the 1minute mark: